A Strange Way to Go Through

(Extended to the 24th of November.)

The group of eight artists based in Madrid, unified under the name Montoya, presents the exhibition A Strange Way to Go Through.

The exhibition is built on an idea of diversity. Themes such as sexuality, adolescence, death, immigration or loneliness are discussed. A unified point between the various photo projects is the presence of the human figure as the main path of speech. The subject who is present, absent, represented or deformed articulates a discourse in which the subjective is prioritised over an objective approach.

An introspective look into common realities.

The show was selected from many applications to be part of MONAT DER FOTOGRAFIE-OFF BERLIN. A festival founded in Paris that has been going for 20 consequtive years to focus on the work of emerging photographers from around Europe. This marks the beginning of the festival in Berlin, and in future installments both cities will showcase photo exhibitions in parallel. 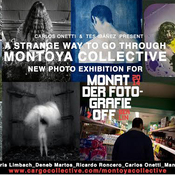