The exhibition includes the Berlin Premiere of two new video works exhibited and produced in NYC by Hanna Schaich that tackle grand stories, epic events, and then slide sideways into the deeply personal. Hannas work often focus on an individual’s search for self-definition and walks the line between transcendence and destruction. Identity is closely linked to physical environments, from an ice skating rink to a local public pool.

Evelyn has her very own story to tell. That, as such, is nothing new, but most of her subordinate clauses when talking reveal more about herself and her life than an average diary. This film is a snippet of Evelyn’s life. It came into being because the life paths of two women crossed at a very peculiar place and brought them close together probably not least because of their unifying extraneousness.

In Falling Into we find ourselves in an ice skating rink observing figure skaters. From there we enter a new world in Central Park Zoo. Like “Taking Over”, the work is also about loss, the absence of desire, aggression, and voyeurism among others.

HANNA SCHAICH (1986) is an artist working and living in NYC and Berlin. Since 2013 she has been studio assistant for video artist Janet Biggs and since 2014 for Erik Schmidt. She received her undergraduate degree in 2012 from Kunsthochschule Berlin Weißensee and is currently working on her master thesis. Her works often include paradoxical action sequences and storylines, and playing with gender and gender roles. She loves the moving image, extremes, philosophy, psychology and theories about gender and seeks to combine these themes in her work. Her works often focus on an individual’s search for self-definition and walk the line between transcendence and destruction. Her works have previously screened and exhibited in New York City, microscope gallery, Germany at the Festival for Film and Performance, Halle; Schillerpalais, Berlin; The Festival for Interdisciplinary Processes, Frankfurt am Main; Ballhaus Ost, Berlin; and Localize Festival, Potsdam. She received a grant for “performance” at the Summeracademy in Salzburg and has just finished the “Cuts and Burns Residency” at the Outpost Artists Resources in Ridgewood, New York. 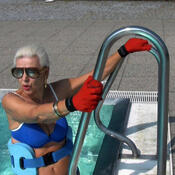 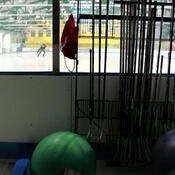